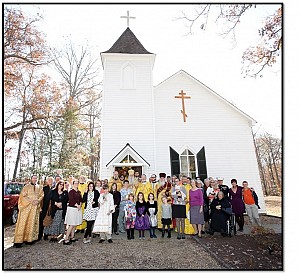 St. Herman of Alaska Orthodox Church, a parish of the Russian Orthodox Church Outside Russia (ROCOR), was originally granted mission status by the Orthodox Church in America (OCA) on May 1, 2004.  That particular day’s icons on the revised Julian calendar were, providentially, the "Unexpected Joy" of the Theotokos and the "Myrrh-bearing Women.”  In the evening of May 9, our founding members gathered together at the historic Aquia Episcopal Church’s fellowship hall for a Prayer of Thanksgiving for our new mission community.  At the time we did not realize that this was just the first of God’s many blessings upon us through our Episcopalian friends at Aquia.

Our founding priest, Archpriest Michael Roshak, celebrated our first Divine Liturgy as a mission community at the Stafford Courthouse Community Center on May 30, 2004 (Pentecost Sunday). Since then, God the Holy Spirit has clearly engendered a true spirit of Christian fellowship and love that is still quite evident today.

On August 15, 2004, we celebrated our twelfth Divine Liturgy together at our new location, Fredericksburg Square, in downtown Fredericksburg, Virginia.  We witnessed our first chrismation of a convert to Orthodoxy only two months later on October 24.  On November 6, Metropolitan Herman of the OCA provided his blessing to dedicate the mission to “Christ the Savior.”  A mere 22 days later, we witnessed our first two baptisms.

We have worshipped at our current location, the historic Clifton Chapel in Stafford, Virginia, since January 1, 2005.  At first, we had access to the property only for Saturday Vespers, but one month later Aquia church granted us full-time use of the chapel and grounds.  We celebrated our first Divine Liturgy in our long-standing home on February 13, 2005 (Zacchaeus Sunday).

The historic Clifton Chapel was built in the 1850’s and provided a convenient place to worship for Wide Water, Virginia, residents when poor weather rendered the roads impassible.  Both sides of the Civil War (“War Between the States”) occupied this chapel on a hill overlooking the Potomac River.  At that time there were few trees in the vicinity, and the chapel offered an excellent observation post and a high ground for artillery to guard the Potomac River’s shoreline.  After the war, local families repaired the damaged church, and it continued to serve the community.  In 1896 Clifton Chapel was officially dedicated as a property of Aquia Episcopal Church.  Now, as the home of St. Herman of Alaska Orthodox Church, its quiet, wooded location offers a peaceful worship environment.

On November 26, 2006, our founding priest served his final Divine Liturgy with us.  We were then without an assigned parish priest until September 9, 2007, when we welcomed Archpriest Michael Sekela as our permanent rector.  Father Michael came out of retirement as a priest to serve the Lord yet again, relocating from Chicago, Illinois, to Stafford, Virginia, and bringing us our first matushka (or “Little Mother” in Russian), his wife Theresa.  Father Michael and Matushka Theresa continued together to expand and enhance the family we had started, especially by introducing the concept of congregational singing.  Under Father Michael’s visionary leadership, our chapel conformed more closely to the image of a traditional Orthodox church, when we moved all the pews to the perimeter of the chapel and installed a beautiful, rustic iconostas handcrafted by Father Joseph Toroney.  Through Matushka Theresa’s guidance, we officially established the Sisterhood of the Myrrh-bearing Women, inspired by one of the icons on the day of our founding as an Orthodox mission (May 1, 2004).

God the Holy Trinity has continued to bless us through the friendship and generosity of Aquia Episcopal Church, which granted us occupancy of a newly-built parish hall in 2009 and, in 2010, a ten-year lease for the entire property, including Clifton Chapel, the parish hall, and children’s playground.

On September 1, 2011, upon Father Michael Sekela’s second and “final” retirement, we welcomed Archpriest Alexander F.C. Webster, PhD, and his wife Matushka Kathleen.  Fr. Alexander retired as a U.S. Army chaplain (in the rank of colonel) in 2010, but he continues to teach as an adjunct professor at Northern Virginia Community College (comparative religion) and George Mason University (emergency management).  While revitalizing our community’s liturgical, educational, evangelistic, and humanitarian missions, Father Alexander has steadfastly maintained our congregational singing, now led by the angelic voices of our “liturgical singers” directed by Areti Stylianopoulos.  On April 1, 2012, our very own William Laymon was tonsured a reader, set aside as a subdeacon, and ordained into the diaconate as “Alexander” by Metropolitan Jonah, former primate of the OCA. Previously, in January 2012, Matushka Joanna Laymon formed the Iconography Guild of St. Theodosia.

On December 19, 2012, the congregation met in Special Assembly and voted unanimously to petition Metopolitan Hilarion to receive the mission as a parish of the Russian Orthodox Church Outside Russia (ROCOR).  On January 31, 2013, we cleared the last hurdle for Metropolitan Tikhon of the OCA to dissolve the OCA mission and free us to enter ROCOR.  His Eminence Metropolitan Hilarion inspired us to begin our new ecclesial life in ROCOR as a parish under the heavenly protection of St. Herman of Alaska, Russian missionary monk sent to evangelize Alaska in the eighteenth century and the first canonized American saint of the Church.  Meanwhile, we have dedicated our parish hall to Christ the Savior, the original name of the mission community.  Today our growing congregation numbers approximately 40 adult members and 20 children.  Prospective new members, visitors, and other seekers of the truth of the Gospel of Our Lord God and Savior Jesus Christ will always find a warm southern welcome among us.