Metropolitan Jonah was born James Paffhausen in Chicago, in a German American family in the Episcopal Church. The family lived in Chicago, two years in Los Angeles, and then finally settled in San Diego. Met. Jonah went to La Jolla High, then University of California San Diego; then finished his BA in Anthropology at UC Santa Cruz. During his second year of university, he found the Russian Orthodox Church and was received at age 19, in 1978.

After college, he entered St Vladimir’s Seminary, finishing two degrees, a Master of Divinity and Master of Theology in Dogmatics. After working in real estate finance for a few years, and for the OCA Diocese of the West, he resumed studies toward a doctorate in Theology in Berkeley. He was choir director then deacon at St Nicholas, Saratoga, CA. He interrupted studies and went to Russia for most of 1993, living in Moscow first, and then becoming a novice at Valaam Monastery. He returned to the US at the end of the year, and was subsequently ordained hierodeacon in February and hieromonk in October, 1994, and was assigned to St Mary Magdalene Mission, in Merced, California. He also served as a circuit riding mission priest, working to establish several missions.

In 1996, he received the blessing to start a monastery, and founded the Monastery of St John of San Francisco in Pt Reyes Station, Marin County, CA. In 2006 the Monastery moved to Manton on Mt Lassen, CA. In 2008 he was elected auxiliary bishop to the Archbishop of Dallas, Dmitri, but was quickly (10 days later) elected Metropolitan of the OCA. He served in that position for 4 years, and stepped down in July, 2012.

Since that time, he has served at St John the Baptist Cathedral, and officially was received into ROCOR in June, 2015. He was assigned as the Rector of St. Herman of Alaska Orthodox Church in September, 2017.  He also serves the Holy Archangels Orthodox Foundation, with a home chapel and weekly Liturgies. 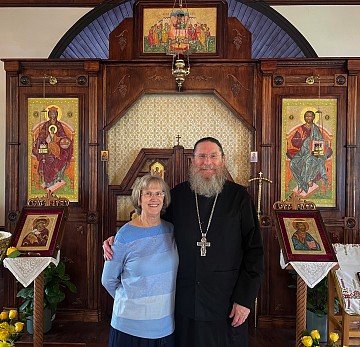 Fr. Alexander Laymon was born in 1954 and raised in the Midwest as the oldest of eight siblings. He attended The Ohio State University under a Four-Year ROTC scholarship, was designated a Distinguished Military Graduate and commissioned into the Ordnance Corps of the Regular Army in 1976. For the next twenty-six years Fr. Alexander served in a variety of battlefield logistics and program management assignments in Europe, Hawaii and the Continental United States. His specialty was managing multi-million dollar research, development and acquisition programs for future military weapon systems. Fr. Alexander retired from the Army in 2002 with the rank of Colonel and pursued part-time employment as an Adjunct Instructor of Religion at Germanna Community College in Virginia. Fr. Alexander was an active and life-long member of the Lutheran Church-Missouri Synod until his academic research into theology and church history as a college instructor led him to join the Orthodox Church with his wife Joanna in 2008.

Fr. Alexander enjoys sailing, is a scuba diver and licensed private pilot. He married his wife, Joanna in 1975. Matushka Joanna is active in the parish’s Sisterhood of the Myrrhbearing Women and is an accomplished iconographer. In January 2012 she founded the Iconography Guild of St. Theodosia under the auspices of the Prosopon School of Iconology. The Guild meets monthly in the Parish Hall and hosts an annual week-long workshop with instruction by a Master Iconographer from the Prosopon School.

Fr. Alexander and Mat. Joanna make their home in Locust Grove VA. They have two children, Erik, a financial analyst, who resides with his family in Pennsylvania.and and Rebecca who currently lives in Virginia. Archpriest Alexander retired in August 2019 as Dean and Professor of Moral Theology Emeritus at Holy Trinity Seminary in Jordanville, New York. He also retired in June 2010 as a U.S. Army chaplain in the rank of Colonel after a quarter century of service in uniform, his last five years back on active duty primarily to conduct twelve periodic visits to the American and Coalition troops of Eastern Orthodox Christian faith in the combat areas of Afghanistan and Iraq, as well as Kuwait and Qatar.

He returns now  in retired status to St. Herman of Alaska Russian Orthodox Church, where he served as Rector from August 2011 until August 2017. Prior to that pastoral assignment and his last stint on active military duty, he servied for 17 years as founding pastor of Protection of the Holy Mother of God Orthodox Church (OCA Romanian Diocese) in Falls Church, VA, and from 1983 to 1986 as pastor of St. Mary Serbian Orthodox Church in Clairton, PA, after his ordination to the diaconate and priesthood in September 1982 by then Bishop Christopher (Kovacevich) while pursuing a doctoral study in Pittsburgh.  During his years of priestly service, Archpriest Alexander also established or revived Orthdox Christian Fellowships (OCFs) at Harvard University, Carnegie-Mellon University, George Mason University, and the University of Pennsylvania.

For the fall semester of 2010, Archpriest Alexander taught undergraduate courses in history and political science as a full-time Collegiate Traveling Professor in Okinawa, Japan, for the University of Maryland University College.  From 2002 to 2009 he served as a Professorial Lecturer at The George Washington University, Washington DC, where he taught freshman Honors seminars in the “Great Books” of Western Civilization and advanced seminars on ethical themes in the University Honors Program. He has also taught as an adjunct professor at Northern Virginia Community College, Germanna Community College, American University, Hood College, Virginia Theological Seminary, Philadelphia Theological Seminary, Wesley Theological Seminary, and George Mason University, where re returned as Adjunct Professor of Religious Studies beginning in January 2020.

Archpriest Alexander has been married for 47 years. He and Matushka Kathleen have four grown children and four grandchildren, two of which (Emma Nicole and Alexa Kate) have remained very active in the life of St. Herman of Alaska Russian Orthodox Church, together with Mat. Kathleen, while Archpriest Alexander served for two years "on deployment" to Jordanville.