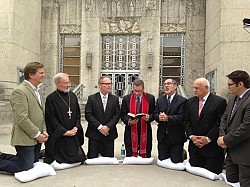 Miracle in Houston, Texas!
By the grace of God the Holy Trinity a miracle occurred in Houston this week!
A seven-member ecumenical delegation of the National Clergy Council (composed of traditional Protestant, Roman Catholic, and Orthodox clergy), including yours truly with the blessing of Metropolitan Hilarion, First Hierarch of the Russian Orthodox Church Outside Russia, met with Mayor Annise Parker of the City of Houston on Tuesday, October 28.  The mission was to persuade her to drop the subpoenas issued to five local Protestant pastors in Houston demanding that they submit various documents (including such confidential and privileged communications as emails, tweets, diaries, and other documents) in connection with a civil suit over a petition drive for a referendum on the city's new "non-discrimination" ordinance.  That new law allows men and women to use any public facilities they desire, particularly bathrooms heretofore restricted to either men or women.
Here is the official press release by the mayor's communications departmenton Wednesday:
http://www.houstontx.gov/mayor/press/mayor-parker-directs-city-legal-department-withdraw-pastor-subpoenas
Before the hoped for, but unexpected, hour-long meeting with Mayor Parker in late afternoon, we visiting clergy held a morning press conference and then prayed together on the steps of City Hall.
Here are two weblinks of the coverage of all of Tuesday's events by KHOU-TV, the local CBS station in Houston:

http://www.khou.com/story/news/local/2014/10/28/mayor-parker-meets-with-clergymen-about-church-record-subpoenas/18084273/
Attached is a group photo of Mayor Parker and our visiting clergy delegation.  (I'm the graybeard second from the left.)  Also attached is a photo of us clergymen praying on the steps of Houston's City Hall at 10:30 a.m., five hours before the meeting with Mayor Parker.
My evangelical Protestant colleagues and I praise God the Holy Trinity for doing a mighty work in Houston this week and for using us, and other Christian clergy, as His instruments.
Archpriest Alexander
Share This:
Facebook
Twitter
Google+
Pinterest
Share This:
Facebook
Twitter
Google+
Pinterest
Website Menu
Monthly Calendar
Event and Services - This Week
Saturday, 21 February / 6 March
9:30 Reading of the Hours
10:00 Divine Liturgy with Ordination
3:00 Catechumen's Class
5:00 Vigil and Confessions